Through the low to the title with Lars Leuenberger

The analysis of the 2014/15 season had shown two main needs: the team should once again receive more leadership and have stronger offensive power. The personnel measures with regards to the 2015/16 season were taken accordingly. This was especially true in the field of the import players. For the first time ever SCB renounced the obligation of a foreign defense and bet on three more forwards next to Chuck Kobasew. With Andrew Ebbett and Trevor Smith they got two absolute leader types and with Cory Conacher a scorer. In addition, five new guys joined the team: goaltender Janick Schwendener, for the defense Timo Helbling, Gian-Andrea Randegger and Ramon Untersander and forward Simon Bodenmann.

Coach Guy Boucher’s intension was to get the team on a solid basis throughout the season with all those new players and then get their best performance in the playoffs. But things worked out differently. It probably became the most turbulent SCB season since the launch of the playoffs. It started with goaltender Marco Bührer not being able to play at full strength at the beginning of his 15th season due to a foot injury. During the first two months the situation worsened with the long-term injuries of Ebbett, Kobasew and Smith as well as numerous further injuries. SCB hired the NHL cracks Derek Roy and Sean Bergenheim as additional imports but still they did not get away. In his 800th game for SCB, right after the November break, Marco Bührer had to give forfait due to his foot ailments.

A few days later Guy Boucher was released, and his former assistant Lars Leuenberger took over. The injury situation further aggravated under him. Marco Bührer’s replacement, Daniel Manzato was injured already in his first game. And it continued in this style. In phases, up to ten players were missing. With the Finn Mikko Kousa another import defender was engaged and in mid-December they applied for the eighth and last license for an import, for goaltender Jakub Stepanek. At the beginning of the new year Eric Blum, the most productive defensive player, got hurt as well. Thereafter, seven defeats in series and the fall from the playoff ranks onto 9th place followed. It was only in the second to last qualification round that the liberation succeeded and the playoffs were secured thanks to a 3:2 home win against Lausanne, the direct competitor in the race to the last playoff rank.

SCB now had to compete against the sovereign leader ZSC Lions and started with a lucky 4:3 win after shootout. In retrospect, this surprising success was the starting signal to a run no opponent could stop anymore. The huge favorites ZSC Lions were defeated 4:0 not least because of the better coaching on the Berne side. Then SCB retaliated for the 0:4 defeat in the semi-finals of the previous season against HC Davos with a whopping 4:1. SCB had digested the 1:7 slack in the third game in Davos easily. In the finals SCB lost the starting game against Lugano but won the following three games, always with a one goal difference. On April 12, SCB celebrated their 14th championship title in Club history in Lugano after the game winner of Derek Roy eight minutes before the end, which led to the 3:2 win. 12:2 wins, 11 of them with only 1 goal difference, 5 in overtime and 1 after shootout stood in the results statistics at the end.

Especially three factors marked the great success that was hardly conceivable a few weeks before: Goaltender Jakub Stepanek was a tremendously reliable backer and, above all, the calm himself. Coach Lars Leuenberger and his assistant Marco Bayer constantly set on four blocks and they coached the team optimally. And the players proved to be a closed and always determined group which was not to be let out of concept at any time. 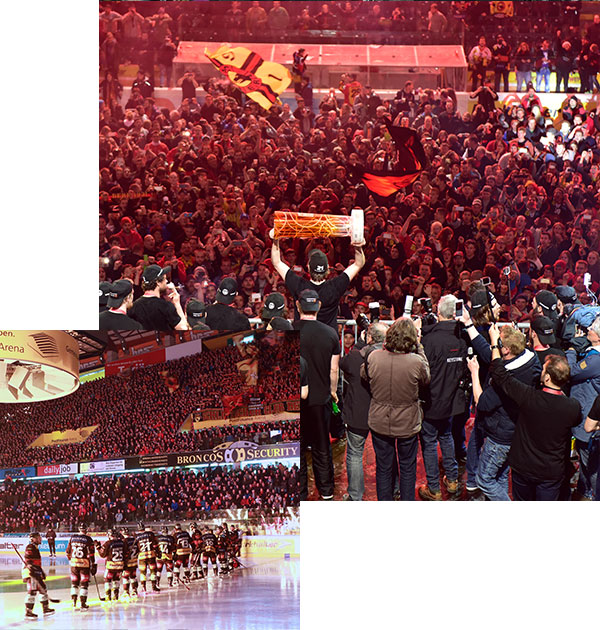