Winner of the qualification again – Champions with Huras

Larry Huras was engaged as the new head coach, Hans Kossman was by his side as the assistant. In addition, Olivier Gigon (goaltender/HC Fribourg-Gottéron), Caryl Neuenschwander (forward/HC Fribourg-Gottéron), Dominic Meier (defender/EV Zug) and Martin Stettler (defender/SCL Tigers) came as new players. For the third time in a row SCB won the qualification round in the 2009/10 season. With 102 points out of 50 games SCB started the adventure “playoffs”. The Bernese played against Lugano in the quarterfinals and, with 4:0 victories, qualified for the semi-finals in which they met with Kloten Flyers. The guys from Zurich were more persistent than Lugano but SCB won again with 4:0 victories.

In the finals, SCB met with Genève-Servette HC who had been the second best team in the qualification. SCB started well in the series, led it with 3:1 and, in the fifth game,once again had the chance to win the title in their own stadium. Since the playoffs were introduced, with 5 championship titles (1989, 1991, 1992, 1997 and 2004) this goal has never been achieved. But SCB lost at home and also two days later in Geneva. It was 3:3 in the series which meant that the Finalissima would take place at PostFinance Arena which was sold out on April 24 for the fourth time in this series and for the eighth time in the whole season. Larry Huras’ team fell behind already after 80 seconds but Etienne Froidevaux (9th minute) and David Jobin (12th) turned the game around in the first period. Jean-Pierre Vigier (22nd) and Pascal Berger (43rd) then secured the 4:1 victory. SCB won the series against Genève-Servette HC with 4:3 (3:2 OT, 4:5, 6:2, 4:3 OT, 2:3 OT, 1:2, 4:1) and therefore the 12th championship title in its club history.

In a great as well as disciplined atmosphere such as Swiss ice hockey had not experienced for a long time, the championship trophy was presented to SCB in its own stadium for the very first time. This was followed by a happy as well as peaceful open-end celebration night and on Sunday, April 26, 2010, in the most beautiful spring weather, a parade through the city of Bern and the championship celebration on the Bundesplatz in front of Berne’s government building. 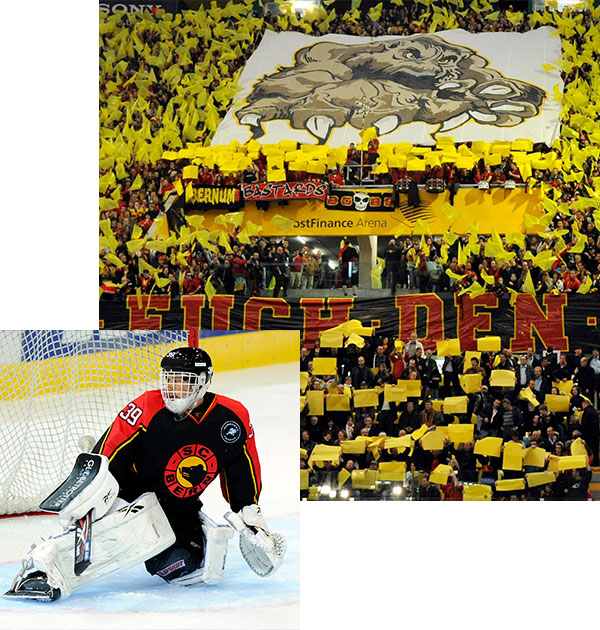