The season 2012/13 started out badly for SCB. Six defeats in nine rounds, only seven wins after 16 games and an intermediate placement on rank 8 was far from their own claims. Not even the NHL-shutout which led to the engagement of the top players Roman Josi, Mark Streit and John Tavares seemed to be able to help. On the contrary: the integration of the three new leading players resulted in more of a regression in a first phase and took its time. Coach Antti Törmänen who had started his first full season as a head coach with Berne was criticized early on already in parts of the media. But then, at the end of October, after a 0:3 defeat in Rapperswil and a midnight speech from CEO Marc Lüthi it finally went upwards. And this constantly. Until Christmas Berne, now led by the three NHL players, appeared as an entity and won 11 out of 14 games.

The new year began with three more victories, the third one (4:0 in Zug) was at the same time the last assignment of Roman Josi, Mark Streit and John Tavares. The following day the lockout was declared finished and the NHL players returned to North America. Taking into account the mentioned adjustment phase, they were not only the expected reinforcements for SCB but also provided great spectacle in a PostFinance-Arena visited better than ever. However, the feared performance loss after the departure of the world class players stayed off. On the contrary, the “original team” of Antti Törmänen came together under the slogan “now more than ever”. In its first game with the original team SCB won against league leader HC Fribourg-Gottéron with 6:0! This was followed by another seven wins in the ten following games. In this phase Marco Bührer set a new league record: during 269 minutes and 9 seconds SCB-s goaltender remained unbeaten.

Injury problems, especially in the defense, then made themselves felt in the results towards the end of the qualification round. SCB lost their three last games in the regular season, the last one against champions ZSC Lions with 2:7, which was the highest home defeat since 1995. Even though, with all the instability because of the changes due to the injuries, SCB started with a 4:0 win successfully into the playoff quarter final series against Genève-Servette but then came into arrears with 1:3 in the series and stood with its back to the wall. The team kept itself in the series in extremis though. Byron Ritchie shot the winning goal to 2:1 in the overtime of game 5. He was also the decisive man in game 6 when Berne was behind with 1:3 at Les Vernets-Hall after 40 minutes. The Canadian equalized with two goals in the final period and Daniel Rubin was, after an overtime with no goals, the only successful scorer in the shoot-out. In the decisive game seven SCB prevailed confidently with 4:1. In the semi-finals against EV Zug SCB also stood before the end of the season. SCB had won its first two home games, always in overtime but lost significantly twice in Zug (2:8 and 2:5). And the 2:8 was the highest ever playoff defeat of SCB. At home SCB then lost the fifth game with 0:4 and were behind now in the series with 2:3. With a 4:3 win in Zug under the leadership of captain Martin Plüss, the man of the semifinals, Berne could pull their heads out of the noose. As already against Geneva SCB won the seventh game at home with the clear result of 4:1.

In the finals SCB met HC Fribourg-Gottéron. After a 4:1 win away and a 4:3 win at home lots would have spoken for a fast decision. But the guys from Fribourg returned with two wins (1:0 and 3:1). The preliminary decision was made in Fribourg where SCB won its fifth game more confidently than the result (3:2) would suggest.

In the PostFinance-Arena, sold out for the eleventh time, at 10:17 pm on April 16, it was the time: After a 5:1 victory the festivities to the 13th championship title of SCB could begin. 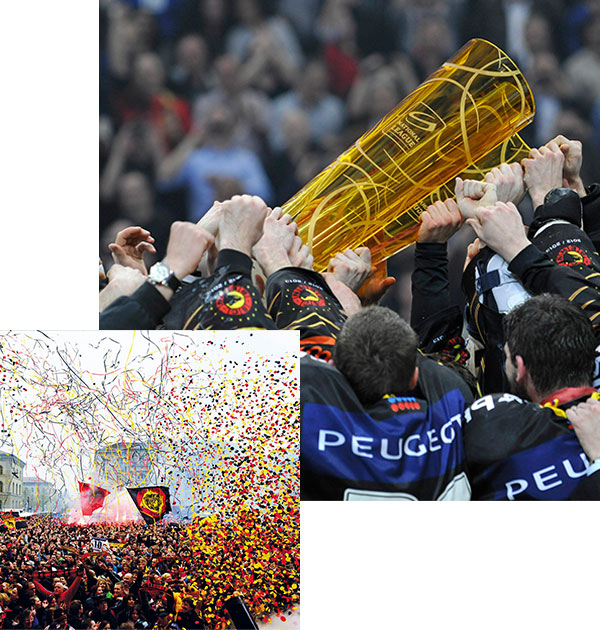