After winning the 13th championship title the first main goal for SCB in the 2013/14 season was to get out of the starting blocks better than in the previous seasons. But already in the course of the preparation some shortcomings were revealed. In the European Trophy in which SCB participated already for the third time the team of Antti Törmänen, which had been newly staffed on numerous positions, showed fluctuating performances. The “engine” then stuttered too in the first phase of the championship. After 15 rounds the defending champion was 9th. Numerous injuries of defenders were just one explanation for the moderate performances.

The new players as well as returnees like Justin Krueger, Thomas Wellinger, Alexei Dostoinov and especially the Finn Mikko Lehtonen could not set significant impulses. And the young players did not succeed in getting to the foreground. Therefore, the responsibility was burdened onto veterans such as Geoff Kinrade, who made a tremendous amount of work not least because of all the absences, and on captain Martin Plüss.

The break in November also did not help to improve. After a blamable performance on November 22 in the home game against EHC Biel (1:4) and the 15th loss in the 24th game the club management was prompted to take a drastic measure and to release coach Antti Törmänen. The next evening already his former assistant Lars Leuenberger was on the bench as head coach. The defeat in Freiburg was followed by a positive series with 9 wins out of 10 games.

At the beginning of the new year they had the chance to get away from the table neighbor on rank 8 and thus away from the playoff stroke in two direct encounters against Geneva but with two defeats that chance was gone. However, there were further opportunities to catch up in weekend double rounds but the team failed to take them. One of them was on January 24 and 25 when SCB first succumbed at PostFinance-Arena in the playoff stroke fight against the newly promoted HC Lausanne with 1:3 and on the following evening they lost 1:4 in Lugano. Lars Leuenberger approached the club management and expressed his conviction that the team needed another kick. Within two days General Manager Sven Leuenberger succeeded to engage NHL-coach Guy Boucher. The Canadian arrived in Berne even before the Olympia break. Under their new boss the team showed fresh vigor in the first home game against HC Ambri-Piotta and won 4:2. But Guy Boucher could not fix the shortcomings that had established in the game throughout the season. To make matters worse for the new coach not only the two centers Martin Plüss and Ryan Gardner were missing - both played for the national team in the Olympia break - but also Byron Ritchie was injured. Due to more injuries almost half of the team was not available. A targeted preparation for the last four decisive qualification games was practically impossible, especially in tactical terms.

SCB started the last phase with a promising 6:0 win against Rapperswil-Jona Lakers but then lost three times in a row (1:2 in Biel, 0:2 against Fribourg and finally 2:5 against the eventual champion ZSC Lions). In the 1988/89 season the playoffs were established with eight teams.  Since those 25 years SCB had been the only club who had always qualified for the playoffs. Now it had also caught SCB.

Guy Boucher’s team had to absolve the placement round of the last four which was held for the first time with half of the qualification points. Even before any of those games were played it was clear that SCB could not descend due to their big lead. SCB won half of the six remaining games and was ranked 9th at the end.

Even though Berne had lost against Zug in the last game of the season there was a reason to celebrate. Ivo Rüthemann finished his big career after 1072 NLA-games (840 in 15 seasons with SCB) and was cheered upon enthusiastically during the whole last period and beyond by the fans. 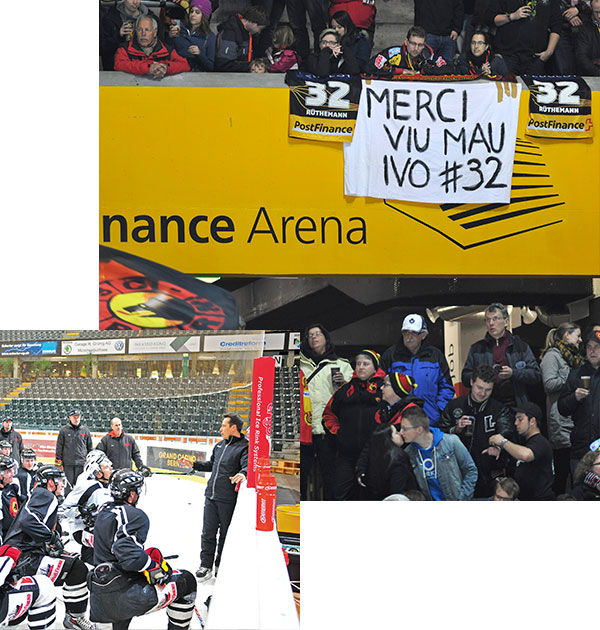