After the first time not reaching the playoffs the 2014/15 season was a new start. However, one with an intense lead. Coach Guy Boucher who had arrived in Berne in January already but couldn’t avert the failure did not return to his homeland after the season ended. Instead, he used spring to analyze with his assistant Lars Leuenberger and with General Manager Sven Leuenberger. Used it to take action and to plan the new season in detail. With defenders Eric Blum, Marc-André Gragnani and forwards Bud Holloway, Chuck Kobasew, Simon Moser, Marc Reichert and Thomas Rüfenacht seven players who were supposed to take an important role joined the team. With these commitments one mainly focused on strengthening the character and the leadership of the team. One measure to strengthen the leader group was the introduction of the monthly captain. With that measure the coach gave the chance to all players to earn a leadership role based on certain guidelines.

With a new coach and lots of new players it was clear that it would take some time for the team to exploit their full potential. In the Champions Hockey League, at the beginning of the new season, SCB started with a 0:7 loss against the Czech team of Ocelari Trinec and it showed that not everything was going well yet. The team also needed one month to get started in the national championship. From mid-October, however, the team worked their way up step by step and took over the lead in the league for the first time exactly before Christmas with a 3:1 home win against defending champion ZSC Lions. SCB also made a good figure until then in the Swiss Ice Hockey Cup which was reintroduced after over 40 years. The away wins against Thun (7:1) Lugano (3.2 OT) and SCL Tigers (4:1) were followed by the semi-final home win against ZSC Lions (2:1) at the beginning of the year. In the finals SCB won with 3:1. Guy Boucher’s team finished the regular season in second place. In the playoffs the quarterfinals against Lausanne went over the full term of seven games (1:0, 1:2, 1:2 SO, 2:1, 3:0, 1:2, 2:1 OT). The decisive goal for the semi-final was scored by the Finn Jesse Joenssu who had joined the team during the season just as goaltender Nolan Schaefer and forward Keven Cloutier. In the semi-finals SCB was defeated 0:4 (23 OT, 2:6, 0:2, 1:3) by Davos who became champion later on.

PostFinance-Arena was sold out in eight games including the Cup final in the 2014/15 season. For the fifth time in SCB history over half a million spectators came to the 31 games at PostFinance Arena, for the eighth time in a row the spectator average was above 16’000 (16’263). For the 14th time in a row SCB was Europe’s Number 1 in terms of the number of spectators. 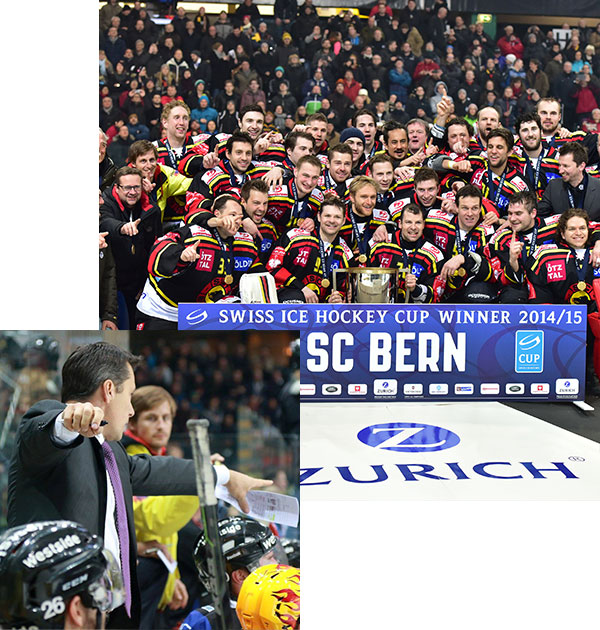