The nerve-wracking 2015/16 season was followed by an almost perfect 2016/17 season. Three new engagements were the key figures on the road to defending the title: head coach Kari Jalonen, goaltender Leonardo Genoni and forward Mark Arcobello. The Finn Kari Jalonen started his engagement already at the end of May with individual discussions with the players. With the start of the ice practices in August he began, along with his assistants Ville Peltonen and Samuel Tilkanen as well as with goalie coach Reto Schürch, to adjust the team to his way of play. Already in the preliminary round of the Champions Hockey League the team showed great ambition and reached the playoffs as a group winner without losing a single point. Partial excellent performances in high-profile international comparisons brought SCB into the quarter finals in which they lost against the later finalist Sparta-Prag.

On the national level the start of the championship was not optimal even though the American Mark Arcobello scored his first goal already in the first minute of the first championship game. With only in part convincing performances and four defeats out of nine games SCB ranked in sixth place only at the end of September. On the one hand this was due to numerous injuries in this phase, on the other hand also because the game system of Kari Jalonen did not work perfectly just yet. However, in October the Bernese showed an upward trend and at the end of the month they were already in 2nd place after seven wins out of nine games. The best phase of the first part of the season followed in November and especially in December when SCB achieved the maximum of 21 points out of seven games. After a slight decline at the beginning of the year with three defeats out of the first four games the team caught up again. They won eleven of the thirteen remaining games of the qualification round and with that they secured the first place in the regular season with 109 points. With that the first goal of the season, the participation in the Champions Hockey League of the 2017/18 season, was achieved.

Led by the outstanding Leonardo Genoni, who finished the 16 playoff games with a blocking rate of 94,89% and achieved seven shutouts during the whole season, SCB got in better shape from game to game in the crucial phase of the season. They impressed with great team spirit, compactness, stylishness and nerve strength.

As often the case, the hurdle quarterfinals proved to be extremely difficult. Even though SCB prevailed in the series with 4:1 (2:1 OT, 3:0, 3:6, 3:1, 4:1) the resistance of EHC Biel was greater than the result suggests. The semi-final was a new edition of last year’s final against HC Lugano. SCB, who this time started at home, lost the first game 2:4 but won the series with 4:1 (2:4, 4:1, 4:1, 3:1, 4:3 SO). In the final against EV Zug SCB shone with a 5:0 win and doubled with 4:2. Also in the third game it was SCB who dominated most of the time but they had to complain about four postshots and lost in the end with 1:2 OT. With that EV Zug’s hope was back up and it got even higher with another 3:2 win in overtime. But SCB was not worried and reacted with a power demonstration in the form of a 6:1 home win and thus earned the first championship puck. And that one SCB won in a dispassionate way with a 5:1 win in Zug. With this 4:2 win in the finals SCB succeeded in the title defense as the first team since 2001 (ZSC Lions). 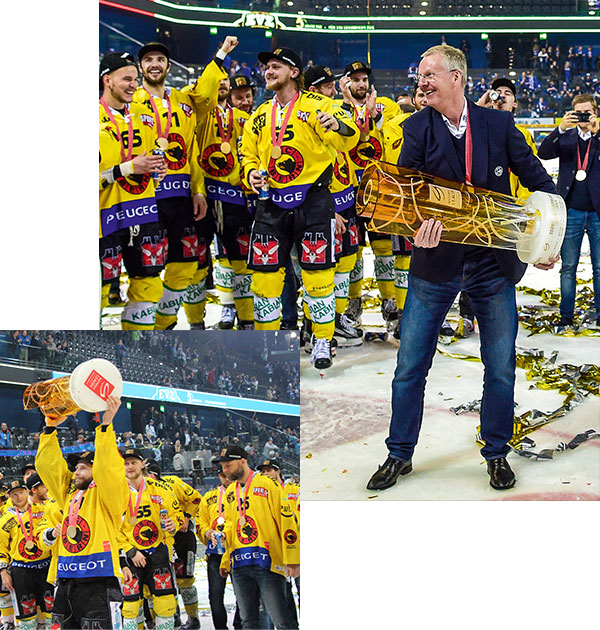