After the nearly perfect season 2016/17 (rank 1 in the qualification/championship title) SCB became the winner of the qualification and then reached the semi-finals with a safe 4:1 victory against Genève-Servette. There, the team of Kari Jalonen lost the highly competitive series to the eventual champion ZSC Lions 4:2.

For the first time ever SCB started a season with five imports. These included Mark Arcobello, Andrew Ebbett and Maxim Noreau, who had joined already in the championship season 2016/17 and the newly committed Mika Pyörälä and Mason Raymond. Three long-time SCB-players (David Jobin, Martin Plüss and Marc Reichert) had retired after the win of the 15th championship title. Forwards Gaëtan Haas and Marc Kämpf as well as back-up goaltender Pascal Caminada joined the team. Defender Yanik Burren and forward André Heim from the own junior department were permanently integrated into the squad. Two more imports were hired over the course of the season, Jeremy Morin (temporary) and Juhamatti Aaltonen.

After the transition to Kari Jalonen’s game system had taken some time in the 2016/17 season the team started good and successfully into season 2017/18 and took over the top ranking in mid-October. And they did not surrender that position until the end of the season. After SCB had scored high in the regular season 2016/17 (109 points/5 points more than ZSC Lions) they achieved a three-digit score again (102) with 11 points more than EV Zug in second rank. At Christmas the team of Kari Jalonen even had the lead with 18 points. In the Champions Hockey League SCB won its three home games in the group stage but also lost just as often away. In the round best-of-sixteen SCB prevailed against Red Bull Munich after a 2:3 home defeat with a strong performance and a 5:2 victory away. As in the previous year the quarter finals against Växjö Lakers (3:2 and 2:4) meant the final stop. In the Swiss Cup SCB reached the quarterfinal as well but lost away 3:5 against EHC Biel.

After the new year the team could no longer reach the sometimes-superior performances as before Christmas. This was also influenced by the fact that SCB put a large number of players to various national teams both in the old-year week at Spengler Cup as well as in the Olympic games in February. In any case, many of the top performers could not quite match their best performances in the following playoffs. Nevertheless, SCB prevailed in the quarterfinals against Genève-Servette with 4:1 and was an almost equal opponent to ZSC Lions in the semi-finals. But SCB lost the series in the end 2:4.

With an average of 16’437 spectators in 31 games in the PostFinance Arena and a total of 8 sold-out home games SCB surpassed the mark of 16’000 for the 11th time and was Europe’s Number 1 crowd-puller for the 17th time in a row. 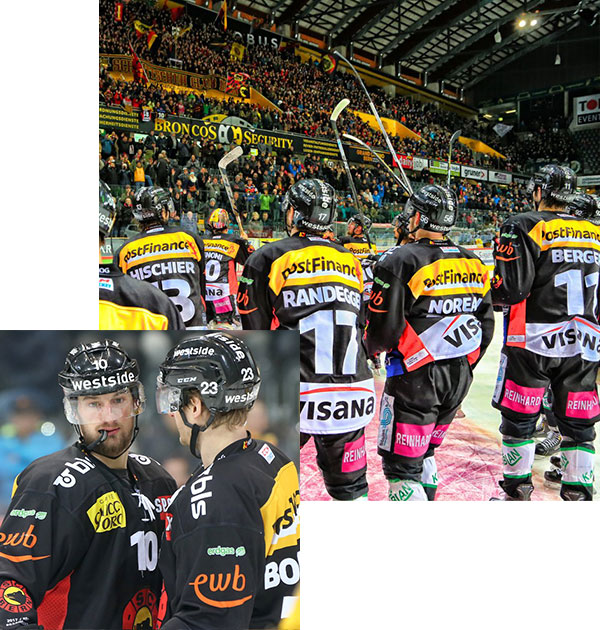