As already in the two years before, SCB was the dominant team in the league also in the third season under Kari Jalonen. After winning the qualification again the team was challenged enormously in the playoffs but mastered all hurdles in the end and won the third title in four years, the 16th in the Club history in total.

With some new players SCB started the third season under Kari Jalonen. They included Swedish defender Adam Almquist, Slovenian forward Jan Mursak, the three Swiss forwards Mattias Bieber, Daniele Grassi and Gregory Sciaroni as well as defender Aurélien Marti. In addition, Colin Gerber and Esbjörn Fogstad Vold from their own junior department were included in the squad of the first team. In mid-November they also engaged Canadian Zach Boychuck as a fifth import. On the other hand there were the departures of the imports Maxim Noreau, Mika Pyörälä, Mason Raymond and Juhamatti Aaltonen as well as the ones of the Swiss Simon Bodenmann, Luca Hischier, Dario Meyer and Gian-Andrea Randegger.

In the first competitive games SCB showed a quality that should characterize the entire season: the away strength. The Bernese won the prelude to the group stage in the Champions Hockey League, first against Växjö Lakers and then against Cardiff Devils. Then followed a start win in the Cup against Wiki-Münsingen and in the National League a kick-off to measure with the away win at champions ZSC Lions. The Bernese succeeded, despite the rather moderate yield in October, to fix their position in the front of the table early. The highlight of this first phase of the season was the NHL-game against New Jersey Devils which the hosts lost with 2:3 OT on October 1 in the sold-out PostFinance-Arena.

From November on the team increased continuously. The only drawbacks were the retirement in the CHL round of 16 against Malmö (1:4 and 0:1) and the defeat in the Cup semi-final against Zug (2:3 after shootout). In January, SCB even played irresistible. After the start of the year with a 4:1 victory on January 2 in the “Tatzenderby” against SCL Tigers with more than 20’000 spectators at Stade de Suisse there was one victory after another. With the exception of a single defeat (0:3 against Zug) SCB managed the stint of eleven games successfully, with the remarkable score of 2.64 point per game. Thus, the Bernese stood out significantly from the competition which led to, not quite surprisingly, a slight decline in performance towards the end of the regular season.

SCB finished again in 1st place – with 101 points and 143:99 goals. Despite this once more impressive performance coach and team were criticized persistently by some media and this continued in the playoffs. There it began resinously just as the regular season had ended. In the quarterfinals against Geneva SCB lost the starting game 0:2. The following five games all ended with only one goal difference. Four times it came to an overtime which SCB decided for themselves in three cases. Especially the sixth game, which the Bernese could decide for themselves, caused a sensation and thus they qualified for the semi-finals with the overall result of 4:2 victories. SCB was ahead 2:0 one minute before the end of the regular time but had to accept the compensation within 17 seconds. Thereafter, three overtimes followed before Mark Arcobello scored for the decision after 117 minutes and 43 seconds. It was the longest game on Swiss ice so far. As in the quarterfinals SCB also failed at the start of the semi-finals against Biel. The 2:4 home defeat was followed by a 2:3 OT in Biel and that put SCB already under pressure badly. But the guys from the city of Berne came back with two victories (6:2 and 5:2) before the lost again (0:2) in front of their own crowd. The above-mentioned away strength was shown once again in game 6 which SCB, with their backs to the wall, won in Biel with 1:0. The decision in game 7 was clearly in favor of SCB with 5:1

The history of false starts in home games also continued in the finals against EV Zug. SCB lost the first final game with 1:4 and was therefore written off in the vast majority of ratings. But the Bernese showed again how strong their mixture of character and team spirit, paired with routine, class and serenity could be. They won the four following games (3:2 OT, 4:1, 3:1 and 2:1) and on April 20th, in the 18th playoff-game in front of their own crowd, celebrated the third championship title in four years.

With an average of 16’403 spectators in 35 games in the PostFinance Arena and a total of 9 sold-out home games SCB surpassed the mark of the spectator average of 16’000 for the 12th time in series and was, for the 18th time in a row, Europe’s crowd puller Number 1. 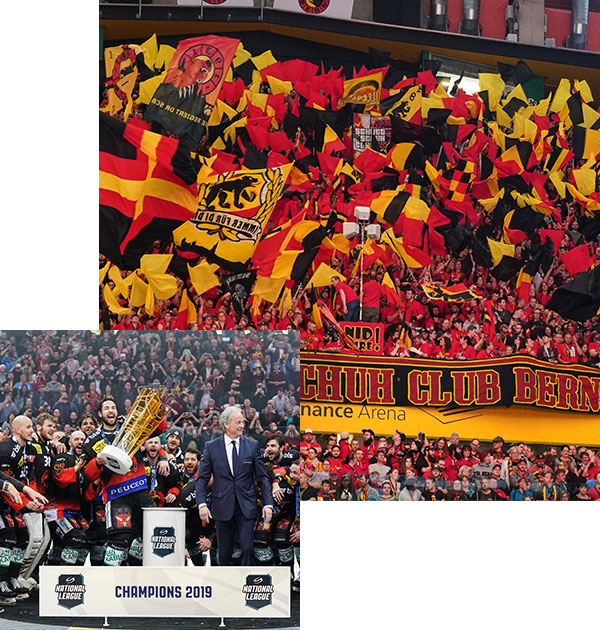